Is x-ray inspection of food safe?

X-ray inspection of food is safe. We are often asked, especially by food manufacturers and processors, how safe our x-ray food inspection procedures are, and we are proud to say that our x-ray inspection technology offers the ultimate in detection performance while producing a dose that is one ten millionth of the radiation level confirmed safe by the World Health Organisation (WHO). We are also ISO accredited.

Below we explain the difference between x-ray radiation and radioactivity and provide some of the evidence to prove that the level of x-ray radiation in our inspection procedures is not harmful to food and other products.

Food that has undergone x-ray inspection remains safe to eat and is indistinguishable in every respect from food that hasn’t been x-rayed. Leading food manufacturers across the world rely on x-ray technology for detection of physical contaminants and for quality control.

Discover more about the facts:

What is Radioactivity / Radiation?

X-rays do not pass through all materials with the same ease; the denser the material, the fewer x-rays can pass through – this affects the quality of the x-ray image and capabilities of x-ray inspection. Hidden contaminants, like glass and metal, show up under x-ray inspection because they are denser, and therefore attenuate more x-rays than the surrounding food.

X-rays used for inspection are different. Like light from a bulb, they can be turned on and off at will. Switch off the electricity supply to the x-ray system, and the flow of x-rays ceases instantaneously.

X-rays are just one of several naturally occurring sources of radiation. The combined effect of all these sources is known as background radiation – and humans have been exposed to it since the beginning of time.

The modern daily dosage received by a typical person is higher than previous generations due to the radiation used in medical science, contributing an increase in background radiation received of about 18%. That might sound like big but the overall levels are so small that the increase is negligible.

The chart below shows the four major sources of radiation that add up to the background radiation received by a typical person. 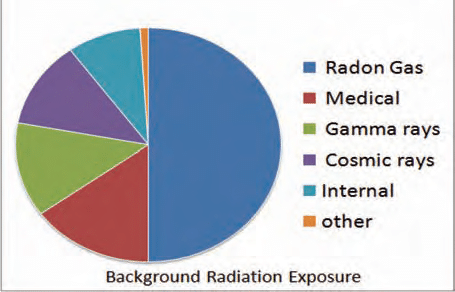 For the average human, natural background radiation contributes about 2,400 μSv (2.4 mSv) of radiation in a year from natural sources. This typically far exceeds the radiation exposure received from an x-ray inspection system in industry. The typical maximum dose rate immediately adjacent to an x-ray inspection system is <1 μSv (0.001 mSv) per hour which means an operator would receive 2,000 μSv (2 mSv) per year when working 50 weeks a year and 40 hours each week in direct contact with an x-ray system.

Naturally occurring radiation comes from outer space. Our daily dose is small because the atmosphere filters most of it out. The filtering effect declines with altitude so those who fly absorb more x-rays than those who stay on the ground.

A frequent flyer, for example, absorbs around 8% more radiation 200 μSv (0.2 mSv) than a non-flyer. The frequent flyer’s typical annual dose is about 2,600 μSv (2.6 mSv) a year. Pilots and cabin crew absorb more still: about 4,400 μSv (4.4 mSv) a year, depending on routes flown and total flying time. Their annual dose of radiation is typically greater than workers at a nuclear plant – and almost twice as high as those who spend their lives at ground level. Even so, the frequent flyer’s additional dose of radiation is extraordinarily low.

Although the effect of x-ray inspecting a road wheel or a suitcase is of little concern, there is naturally reason to be cautious when inspecting items which may be ingested such as food or pharmaceutical products.

Food processors use x-rays in 2 ways:

The technologies have one similarity – both processes involve radiation – but that is where the similarity ends; dose levels equivalent to several orders of magnitude separate food irradiation from food inspection.

The facts about X-ray Inspection

There is scientific evidence to show that x-rays do not harm food. A 1997 study by the World Health Organisation (WHO) confirmed that food radiation levels up to 10,000 Gy does not affect food safety or nutritional value. That means the food was subject to radiation doses around ten million times as great as those used in x-ray inspection. It proved that the food remains safe to eat and that it loses none of its nutritional value. This view is supported by the experience of leading brands across the world who have found that consumers experience no change in the quality other than the improvement by the removal of undesirable contamination.

The dose levels used in x-ray inspection are less than one ten millionth of those used in the WHO study. Food that passes through an x-ray inspection system spends about 250 milliseconds in the x-ray beam and during that short time it receives a radiation dose of around 200 μGy (0.2 mGy). The levels are so low that organic food can be subject to x-ray inspection with no diminution of its organic status.

The facts about Food Irradiation

In comparison to x-ray inspection the dose levels for food irradiation are much higher and range from 500 Gy up to 10,000 Gy in approved protocols for food items. (Source: Radiation Threats and Your Safety, Armin Ansari, 2010, page 311)

Whichever way you look at it, food that has passed through an x-ray inspection system is as good and tasty to eat as it was before it was scanned. There are no measurable changes to flavours, textures, or nutritional values: food that has been x-rayed is indistinguishable in every respect from food that hasn’t.